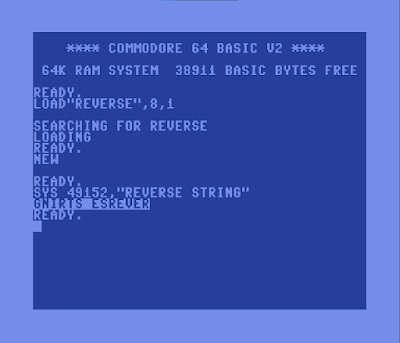 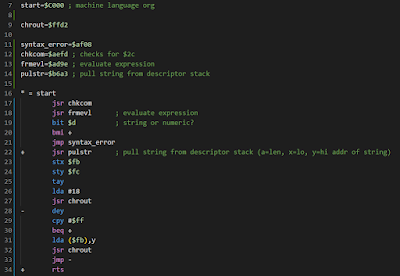 One wonderful feature of the Commodore 128 was its compatibility with the Commodore 64.  It was an evolution of the Commodore 64 and still supported all the software and hardware from before.  For me it was a no-brainer to buy.  80 columns, plus new features, plus CP/M.   Adding a mouse, GEOS 128, REU 512K, and 3.5" floppy, and I thought it was the best place to be this side of heaven.

There were multiple ways to go into Commodore 64 mode.

But the only way to get back into Commodore 128 BASIC 7.0 was to reset the system.
Fast forward a few decades or so, and now we can add GO commands to the other BASIC systems to switch between them.  Links: cross-platform source, Windows binary release.
How does it work?  This is emulation.  Sorry purists.   The Commodore 128 MMU was built so there is no going back out of C64 mode.  This was by design to keep 64 mode on the 128 very close to 100% compatibility.  But emulation?  Anything goes.  The GO command is hooked, the argument is checked for a number, and if the number is right, it goes to that Commodore model by restarting the emulation for that system.  And thus, when running the BASIC for one system, can quickly switch to another other system (or even reset the system) using the GO command.  It even prompts for amount of RAM to allocate (except 128 is fixed at 128).

Limitations?  Oh, sorry.  This emulator is text only.  No full screen editor.  Doh!   No screen pokes either (well not displayed).  Nor PETSCII and commodore graphics characters.  But does support console history editor on Windows.   Linux and MAC builds (you can build from my open source project) provide only simple line editing capability.   Does provide accurate 6502/6510/8502 emulation, RAM banking, etc. according to the platform.   So pop into the MONITOR on C128 or C16, Plus/4, or SUPERMON on other platforms to write and edit machine code.   And because using console window, the text display size is not as limited, 88 columns for Vic-20 and 160 columns for C128.

Save and Load from .PRG is supported as well (except PET at this time, some other limitations).  Disk device is ignored, so defaults to local file system.  Even use absolute and relative paths.
So for simple programs, and just playing around in BASIC, it's not too bad.   Text background and foreground color for Vic-20 is enabled because that color palate is more compatible with the Windows console default colors.  Reverse text should work on all systems.  Home, clear, cursor positioning may work in programs only, not for editing.

The Commodore 128 is a favorite system of mine.  I've owned a DCR model (cost reduced with embedded disk drive, the metal case) since around 1987.  And it still works fine!

But this article is about emulation.  I already wrote a C#/.NET based emulator that supports PET/Vic-20/64/16/Plus/4, and just recently have added 128 support.   I thought it would be difficult with the C128 custom MMU and VDC.  There was a learning curve.  And I faked enough of it to boot and work (even with no Z80). 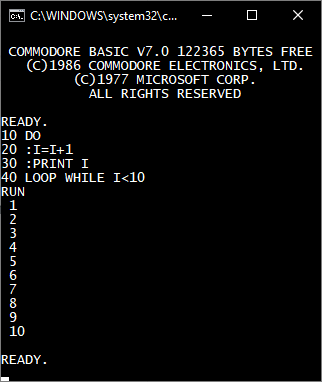 This simple emulator is a text based emulator run from a console window.  It provides only text input and output, in addition to LOAD/SAVE support to the local disk as .PRG files (just a common extension for Commodore program files, unformatted binary data).

Feed the emulator some Commodore ROMs (not included, recommend grab these from Vice) and it can map ROM/RAM into the 6502 memory space and execute 6502 instructions. There are some common KERNAL entry points for character in, character out, check for stop, and load/verify/save operations.   These calls are hooked to redirect console input/output to the emulated 6502.  Effectively the Commodore computers are running in software.

These emulated systems don't do the fancy video games.  There is a long list of things they don't do, including no PETSCII graphics either.  No graphics.  No sound.  No timers.  No color.  They don't even do full screen editing.  They are stuck using the console editing features.  Not great, but it works -- cursor up to recall a previous command in the current screen line editor.  And the Windows console editor even survives restarting the program or restarting the Commodore.  Please note it is best to use Caps Lock as the Commodore expects uppercase commands most of the time.

What this does function as is a good text BASIC interpreter, and 6502 machine language environment.   Some of the Commodore systems such as the C128 and Plus/4 include their own machine language monitor (MONITOR command).  On the PET, Vic-20, and C64, you can load the appropriate SUPERMON for that system. 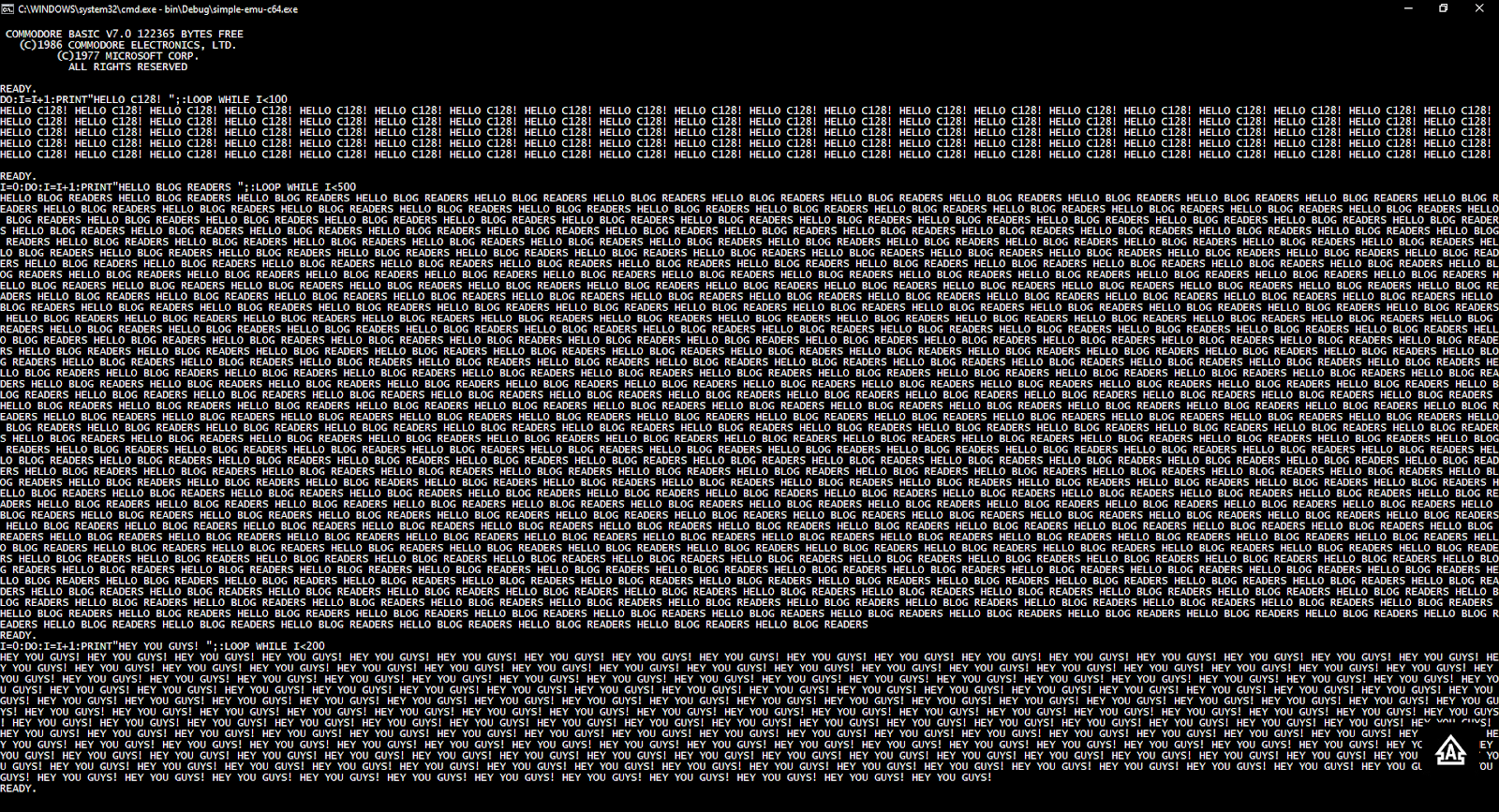 Since we're using a Windows console in this case (or Linux or MAC... .NET supports them too!), it can be sized to screens larger than 40x25 as well.  Imagine the capability of full screen text written in BASIC!   Or a long disassembly listing in the monitor.  Wow!

Here's how to get started.

1. Grab the sources from github

2. Grab the roms from vice, (a much larger more complete and more accurate emulator, but why would you want that much fun?).   Put these in a c128 directory from which you will run the simple emulator.  While you're at it, create subdirectories and copy roms for the other systems too.

Why do this?  To me this was a challenge to first emulate the 6502, and a challenge to minimally support Commodore BASIC.  I thought what is the least amount of support that is needed to have a useful Commodore computer?  I knew about the Kernal jump table definition by Commodore.  I had seen others do it successfully.  And I wanted to do it my way.   It was just a mountain to climb, and since I love 6502 and Commodore computers, it is an enjoyable part of my hobby. 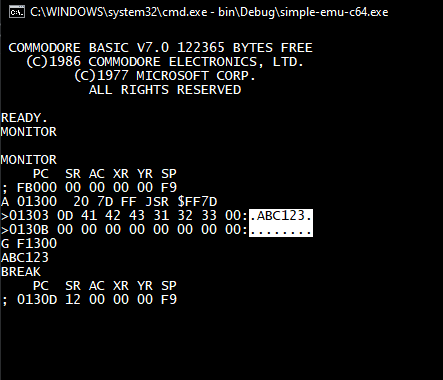 What's next?  Probably more blogs and videos documenting and demonstrating this stuff.  My goal is to help others learn and in this case specifically enjoy Commodore systems.   The source code is open so you're free to inspect and modify it (giving credit where credit is due of course).