Shape operations are functional, and work has begun on leveraging BASIC keyword extensions (borrowing from my own HIRES for C64).

While the SYS syntax is implemented, the BASIC keyword work has just begun.

Source and disk image are on github

Knight vs. Dragon prototype on Commodore 128

My son Ben (age 9) designed all the graphics, background and colors.  He edited the background screen strictly with inverse spaces.  Sprites were edited on the Commodore 128 with SPRDEF.  The programming manual has instructions on saving the sprite memory to disk.  And I was able to save both the text screen and colors to disk also using the dual screen capability of the Commodore 128 to enter the commands via the 80 column screen (ESC+X).  My memory is that I used MONITOR to save using hex addresses, whereas I'm showing BSAVE commands here for more symmetry with the program listing.

I wrote the BASIC demo to randomly move the characters, and flash the border red when the sprites collide.

My son and I made a great team on this project.   Thanks to his art and I am very pleased to have introduced him to the Commodore 128 and have him involved in computer animation. 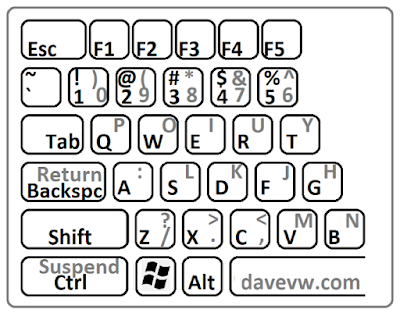 Back in the day (decades ago), I purchased a Matias Half Keyboard (USB) at a computer show because it was so cool.   My plan was to mouse with my right and type with my left.   There was a bit of a learning curve, and the keyboard was so tiny.  Every key was overloaded so much, I found that using function keys, hotkeys, numbers, cursor keys, etc. was too tricky.  So I ended up putting it in a drawer.   Years later I resold it on Amazon for the same price I paid.

Then years later I missed the half keyboard, want to use it occasionally.  So I looked for an alternative, and while there are other hardware half keyboard solutions out there, often they are expensive.  Even the Matias one is now listed at $595.  I paid a sixth of that long ago, but it's a niche product that only a few will need, so that figures.

A few more searches and I found that someone had created an AutoHotKey script to do the basic trick in software to make the spacebar a key modifier.   The script is straightforward and well written!

In case you don't know AutoHotKey, it is software for Windows that allows you to remap keyboard and mouse events (and other similar things) for macros, and other automation operations.  It has its own scripting language for capturing key events and performing key sends, etc.   Like you could use it to disable the Caps Lock, launch, close, and reposition your Windows on the screen, copy and paste text on the screen, and all sorts of things.

To help me learn to use this simple one-handed keyboard script, I've drawn a keyboard with Microsoft Paint, printed it out, and taped to my monitor for easy reference.   While the script supports left or right hand operation, I only drew the left hand.

Skimming the script thread, it appears others have discussed displaying a reference on the screen, so that exercise is left to the reader.

Hope this is also useful to someone else.