Starting just today you can write Commodore 64 assembly language programs compiled for 6502 with The Fast Assembler and scroll up and down through them with just a touch of a function key. No more need to rely solely on the LIST keyword.  This tool has been available for BASIC programmers for quite a while.  But now it is also available for 6502 assembly language programmers too.

I wrote the scrolling extension for The Fast Assembler way back in the summer of 1987 and submitted it to Compute! magazine for publishing.  Yet only my Scrolling BASIC Editor for Commodore 64 was published in their magazine and distributed on their floppy disk.  No one had seen the extension version since and the code has been sitting dormant in storage for a long time.

Yves Han wrote The Fast Assembler and it was published in January 1986 Compute!'s Gazette.  When I went about to write the original Scrolling BASIC Editor, I used The Fast Assembler to write the source code and assemble into machine code.  I felt this was the perfect tool for writing machine language programs, so I proceeded to integrate it into his solution as well.

Also added to The Fast Assembler with this extension are low byte < and high byte > operators similar to one or more assemblers of the era.

Fast forward over 31 years to today when writing this article, and I've got the retro hardware bug and retrieved the data from some of my old Commodore floppy disks using ZoomFloppy.   Add in a dash of Commodore emulators, archived magazines and disks, blogs, and electronic mail, and we've got new interest, and new means of self publishing and distributing information.  And I just recently changed my credits to my website URL (no we did not have those prior to 1990), otherwise no logic was changed in the last many decades.

Below are some resources.  Recommend you grab the floppy disk images instead of typing in the programs from the magazines.  The integrated version is available ready to use as FA+SCRLEDIT. 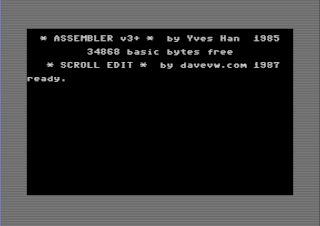 If you want to recreate from source you can because all source is available.  And/or if you wish to create the patched integration from compiled versions, instructions can be listed from  README.BASIC. 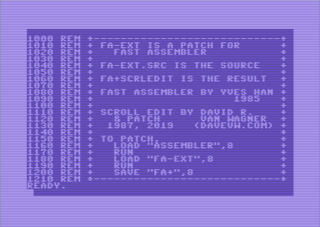