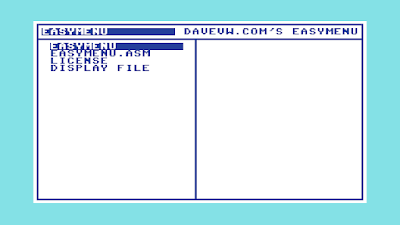 I originally wrote this somewhere between 1985 and 1987.  I submitted the program and an article to Compute! publications but was rejected, probably not unique or attractive enough of a submission.  Well, here it is for the public to see approximately 35 years later.  Not sure if I wrote this originally in assembler, or just machine code.  I suspect I used machine code for this one.  I have done a fair job now disassembling and crafting into assembler (using ACME cross assembler) for a more modern experience.

My typical use was to either see what was on the disk, or as a game launcher.  Imagine the possibility of many games packed on a 1581 disk.  It even supports launching cartridge images.

I have used it with 1541/1571/1581 but not sure if it works with fully populated large drives.  Seems to have trouble with some non-standard drives.  I plan to review that in the future.  (Update: some fixes have been applied to the original code starting with tagged version 1.1)

Keyboard and joystick(#2) controls are documented with the source README.