Arduino Ethernet Shield without the Shield

This project adds Ethernet to an Arduino. 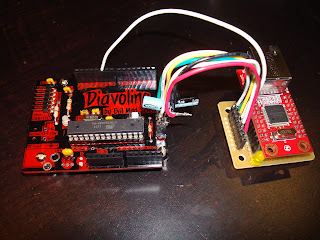 I had already purchased the WIZ811MJ﻿ module, and crafted the W5100 SPI module which essentially has the components of a basic Arduino Ethernet shield without SD support. After recently aquiring an Arduino Duemilanove clone, the Diavolino, I used jumper wires to connect the two, but it was too messy. Using solid wire soldered to female headers, and one stray connector wire, I resulted in a cleaner solution. The ethernet module runs on 3.3V but this Arduino runs on 5V, so a voltage regulator circuit was necessary, and ended up soldering it right to one of the headers along with support capacitors (a cleaner look would involve shrink wrap tubing). The W5100 tolerates 5V inputs and the 3.3V outputs are accepted correctly by the Arduino, so no signal voltage translations were necessary. I successfully tested this adapter cable with the Arduino example Ethernet telnet client.