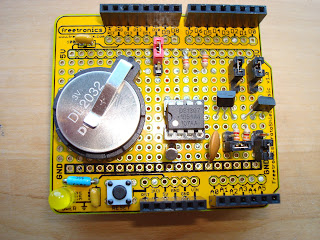 This is a prototyped Arduino shield that is 5V and 3V switchable.  The real time clock (RTC) is a DS1307 running at 5V, with a backup battery to keep time while not plugged into another power source.  It connects with an Arduino or similar board via I2C, but using a voltage translation (level shifter) circuit using FETs (reference: Philips) to isolate the RTC chip that always runs at 5V from the Arduino CPU which can be running at either 5V or 3V.  This provides support for 3V Arduino format boards such as the Arduino Due which can be damaged if 5V is applied to its lines.  Jumpers are provided to select the voltage (red), the I2C lines used (D3/D2 or A5/A4), and whether 3.3K pull-ups are used on the microcontroller side of the circuit.  Note the RTC always has its pull-ups in place.

Note that due to USPS regulations, Lithium batteries cannot (without meeting specific conditions) be shipped via US airmail so my Digi-Key order that included the FETs and crystal was revised to eliminate the batteries.  These are available cheap in bulk from many distributors, but to save immediate costs including shipping I ended up purchasing a single one at the local drug store.  Next time I may use ground shipping for such items, but I also found a local electronics supplier that has a decent price.
﻿﻿
The DS3107 chip was purchased overseas via eBay as it was available much cheaper than domestically.  Hint: look for free shipping.

A different 3V RTC chip could also be used, such as a surface mount chip, and then the level shifting circuit (FET drain/source) needs to be reversed per the original circuit recommended by Philips Semiconductors because the low/high sides of the circuit are reversed when the RTC is running at 3V and the microcontroller is running at 5V.
For prototyping the FETs ordered are in package TO92-3.  I ordered two different FETs and ended up using the more expensive ones with a higher Vdss rating (200V).  A cheaper FET in SOT-23 packaging with a lower rating of 50V was also sourced but not tested.
Adafruit has a tutorial including an Arduino library for use with the DS1307.  I tested this library on the Arduino Leonardo and Duemillanove running at 5V.  For the 3V Due, I used simple raw I2C (Wire library) commands to talk to the DS1307.  Only SCL1/SDA1 worked for me on the Due (had to jumper these as the ProtoShield is pre-R3 and doesn't have dedicated SCL/SDA pins). 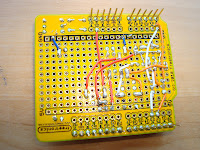 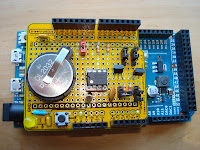 (I had meant to publish this article in February but due to some bad soldering on my part and challenges with the Due, this prototype wasn't working properly.  Took multiple re-visits to fix everything.  Now I am very glad it is working now.)
Posted by Dave VW at 3:09 PM