This project was inspired by a Radio Shack print advertisement or similar article showing how to make a strand of Christmas lights using LEDs and an Ethernet cable connected to an Arduino controller.  I stole the idea and created the rest from scratch.

﻿
I found some large 1cm diameter LEDs that look like jelly beans at a local surplus electronics warehouse, and swapped out a black Ethernet cable that was in use in my house.  Having just completed assembly my Arduino Duemilanove kit, and being the middle of December, assembling Christmas lights seemed like the logical next project.  Originally I was going to place the LEDs 11 inches apart to use up the entire length of Ethernet cable, but my wife talked me into having them closer together, so after making cuts in the outer covering at 11 inches, I made additional cuts halfway between them, now every 5.5 inches.

The point of using an Arduino is addressing the individual LEDs.  As the Ethernet cable has eight wires, that could accommodate seven LEDs (seven lines of power, one common ground), so the original plan was to include seven and the Christmas Light Shield shown does support seven LEDs.  But the Arduino Duemilanove supports exactly six PWM (pulse width modulation) outputs at D11, D10, D9, D6, D5, and D3, so I settled on a six LED strand.  Each light can be individually dimmed to a resolution of 256 values (0=off, 255=bright).  This allows the lights to chase, flash, dim, and perform other light patterns.  Two inputs (in addition to reset) were added to the shield to control the nine patterns of the lights programmed into the Arduino. 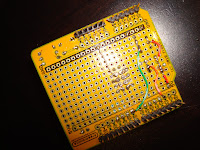 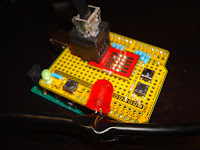 ﻿
The shield was built on a empty prototype PCB, with an attached RJ45 jack and corresponding breakout board.  The lines of the Ethernet jack were wired to the PWM ports using 500K resistors.  The switches were wired to inputs at D2 and D8 with 18K pull down resistors, and those circuits are wired to 5V when the switches are pushed.  The RJ45 jack turned out to be a great way to connect and disconnect the wires.