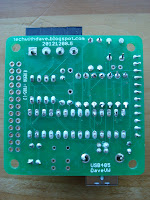 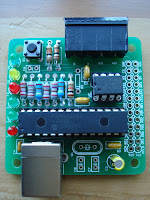 The second batch of through hole PCBs arrived recently.  I had fixed errors in the original design, moved some components around, corrected the silkscreen, and added silkscreen labels.  The design was uploaded to China, services paid for, and twelve PCBs were handed to me by the postal worker about four weeks later.

The worst offence of the original design was necessary green wire jumps and cuts rework for the Vcc and Vusb lines.  This new board doesn't require any rework.  I built up two boards and one works, and unfortunately I snipped a power line on the second board while trimming leads on a capacitor and some green wire solved the problem (oops, but good save!).

The silkscreen labels are a bit too small to see with my eyes, but make the board more usable.  I moved the JITE socket out so it hangs off the board with the benefit of the board also fitting screw terminals like those used in my (mostly) surface mount USB RS-485 Adapter board.
Posted by Dave VW at 2:53 PM