Any Chip prototyping board with USB 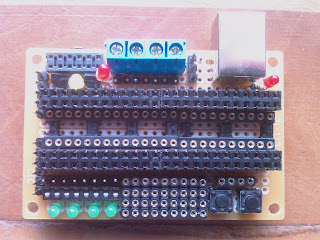 Here is a prototyping board I developed in early 2011.  It is a step up from breadboarding in that it has a couple switches, USB connector, LEDs, 3.3V and 5V voltage regulators, power LEDs, screw terminals, and a small breadboarding area.  All the components are distinct and not connected to each other except for some ground connections and ground pins.  The LEDs have a socket for a resistor array based on the voltage used.  This prototype board is agnostic to the chip manufacturer or chip type.  The USB connector can be used just for power, or used as a USB device with the right chip.  It can fit up to 48 pins of narrow chips.  Like the 28 pin PIC18, 28 pin PIC24, 8 pin LTC1785, 16 pin MAX232, etc.

Also shown are the underside, PIC24 glue board, and glue board plugged into prototype board.  The PIC24 glue board is the only portion that makes it Microchip PIC24 specific.  This glue board has all the shared ground and 3V3 connections as well as capacitors and ICSP connector.  The result is using up two of the rows of connectors, but relieving a lot of wiring common to PIC24 USB implementations.  There's no stopping one from creating other glue boards with other functionality.

The original goal of this board in addition to being manufacturer agnostic with some common components, is to be the basis of a PIC24 RS-485 monitor prototype.  More on that later.